During the operation of a plant or after a revamp, the plant sometimes under-performs for reasons that are not immediately apparent. In such circumstances it is necessary to carefully investigate the problem, go beyond the obvious cause and find the real reason for the problem.

During a distillation column revamp for about a 30% capacity increase, it was decided that the existing air-cooled exchanger would still be adequate for the new duty. After start-up it was found that the column temperature and pressure could not be controlled and continuous venting was required. The immediate solution required by the plant operator was that a new larger cooled be installed. Purchase and installation of a new cooler would have added considerable cost and delay to the project.

The calculations showed that the cooler size was adequate. After this was confirmed with a cooler supplier, it was realized that the problem was caused by something else. Careful observation of the operation, together with a detailed review of piping and control valves showed that the system as originally designed was impossible to vent. It was suspected that the top row of tubes was completely inert blanketed and the only reason the problem did not cause concern before the revamp was that there was sufficient excess cooler surface to compensate for the blanketed tubes.

An infrared remote temperature sensor was used to measure approximate tube temperatures at various locations in the cooler tube bundle. These measurements confirmed that probability that the top tubes were not performing any heat transfer.

A small piping jump-over was installed to allow inert venting from the exchanger. After start-up the exchanger performed as per design and the column could be controlled at the correct temperature and pressure. Not only was the eventual solution cheaper and quicker than the first proposal, but the new cooler would not have solved the problem. 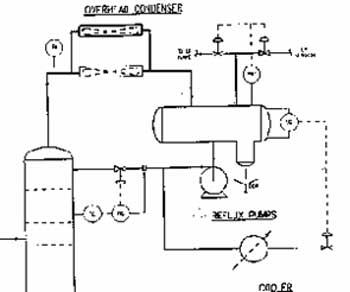